In accordance with the RGPD, we must obtain your permission to store your personal data on this site. If you 'refuse any registration' you will not have access to the content with identification. If you wish to support us, your data may be communicated to third parties. Consult our conditions to know moreTerms of Service 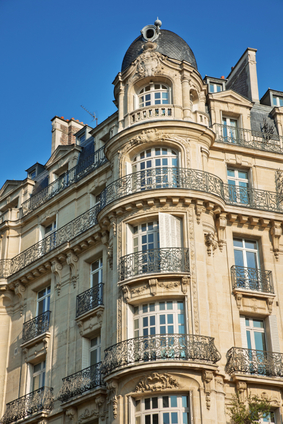 We act in your best interest&nbspand assist you from  drawning up of your project, to negociation&nbspuntil the closing of sale. 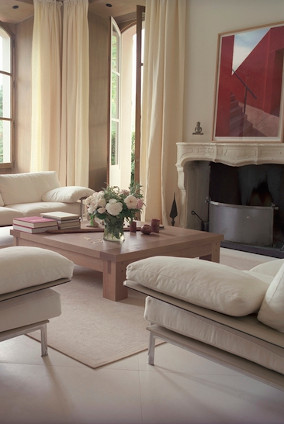 We take care of your apartment when you are not in Paris.

On your behalf, we can :

We can help you : 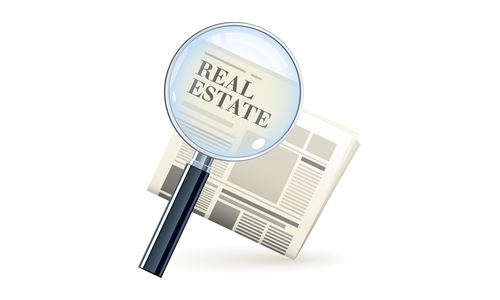 Having a property in Paris

A multidisciplinary team of professionals 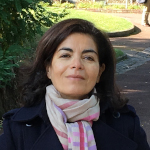 Martine Hillion offers to work in an atmosphere of trust&nbspand to provide tailored solutions&nbspto her customers. She takes advantage of her experience in selling up-market products  to an international clientele.

Property hunters and Real Estate managers are subjects to the  "Hoguet" Law. As other legal entities that deal or assist in Real Estate transactions, they must hold a license.

A project, a question?

A “chasseur d’appartement”&nbspcan work as a freelance or for an agency. His job consists in looking for the right property that best matches the client’s needs and expectations. The property hunter works with his clients from the beginning to the end of the buying process. It usually starts with an introduction/preliminary meeting or consultation to get as much information as possible on the client’s needs, lifestyle and desires. The work then includes searching the market and selecting properties that match initial requirements, giving advice, negotiating prices, paperwork and networking with real estate agents and other professionals.

Home caretakers are involved in the general maintenance and administration of properties. This can be from just from one property up to a whole portfolio.
Their duties include property maintenance, negotiation of contracts with suppliers or with tenants, and administrative tasks.

A home owners association is an organization of homeowners of a particular condominium. The purpose of such an organization is to provide a common basis for preserving, maintaining and enhanced their homes and property.

If a seller works with a real estate agent, the price the buyers have to pay is composed of the net price (the amount of money that the seller really gets) and the agency’s commission (which is usually a percentage that comes on top of the net price.

New figures show the housing market in France performed strongly in the first half of the year, against the backdrop of historically low interest rates.

As is customary at this time of year the five main French estate agent chains- ERA Immobilier, Century 21, ORPI, Laforêt and Guy Hoquet - have published reviews on the housing market for the first half year. There are also brief commentaries from the notaires and two on-line observatories.
In all cases it is rather slim pickings, but all show a market driven by low interest rates and the search for a respectable return on capital by investors.

The notaires (whose figures are only for the first quarter) estimate that sales for the year to March 2019 were 985,000, a record. They talk of 'un marché immobilier en confiance". The graphic below shows annual sales since 2000. 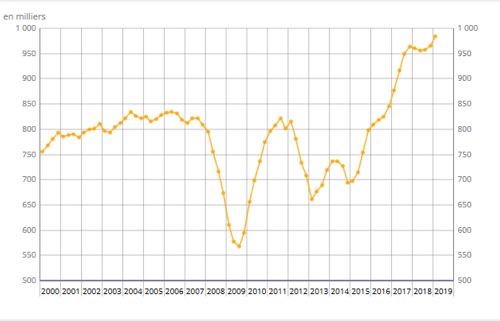 All the agents report a strong increase in sales volume between the first half of 2018 and the first half of 2019 - +7% for Laforêt, +10.50% for Century 21, +11% for ERA Immobilier and up +14% for ORPI.
Nevertheless, as the notaires have pointed out in the past, if measured as a percentage of the housing stock, which has grown by around 1% a year since 2000, sales remain proportionally the same as they were 20 years ago.
According to Century 21, whilst two-thirds of the sales were for the purchase of a main home, sales for investment purposes were 26% of all transactions (34% in the Ile-de-France). Sales to investors rose by +32% over the year, having risen by 17% in the previous period.
The demand for property is generally ascribed to the continuing very low mortgage rates, with loans available from little more than 1%. As Century 21 state: "Thanks to the generally advantageous credit terms, the intentions to buy are particularly numerous, with households aware of the opportunity they have to buy at exceptional conditions that allow them to borrow at a rate below inflation."
According to the mortgage rate observatory Crédit Logement CSA, after having beaten the previous record, with an average rate of 1.29% in May, the average rate fell again to reach 1.25% in June.

With record sales, not surprisingly all the professionals report prices have increased this year, ranging from a modest +0.4% at Century 21 to +3.5% from LPI-Seloger, an on-line observatory.
The notaires are in a mid-point between these figures, stating that (to the period end of March 2019) house prices outside of the Ile-de-France increased on average by +2.5%, whilst apartments by +2.9%. Within the Ile-de-France, the movement was +2.4% for houses and +4.6% for apartments.
FNAIM, the national association of estate agents, state that the price surge is slowing down, with their own analysis showing an evolution of +2.3% in the year to June 2019, against +4.3% a year earlier.
The notaires also consider caution is needed in drawing too many conclusions for rural property, stating: "while price increases continue in urban areas and those of housing shortage, this is not the case in many rural areas."
That the increase in prices is primarily an urban phenomenon is evident from the analysis in house price movements for the main towns and cities provided by the notaires, although once again it is a mixed picture…

The French capital is divided into 20 administrative districts known as arrondissements. They are arranged in a clockwise spiral spreading out from the first in the center of the city. Starting right in the centre, the first arrondissement is situated on the right bank of the Seine around the Louvre.

Each arrondissement has a character of its own, with cafés, restaurants, shops and tourist attractions unique to the area.

Almost all the available lodgings in the centre of Paris are apartments because, except for some grand hôtels particuliers (townhouses), the older Parisian houses were all originally designed as apartments – and so are the newer builds. The typical Parisian buildings, with their 19th century haussmann-type architecture, parquet flooring, iron work balconies, marble fireplaces are on unparalleled elegance.

On the other hand, the newer blocks are often more rationally designed and have underground car parks.

What you can buy?